In this final lab, we will be exploring the interaction of light with matter. Using spectroscopy (also called spectral analysis, spectrometry, or spectrophotometry), we will examine emission and absorption of light by various substances. Spectrometers (also called spectrophotometers) are measurement tools designed to distinguish different colors of light. The spectrometers we will use in this lab detect the intensity of the light (the power-per-area associated with the light) as a function of the wavelength of the light. These spectrometers have a sensitivity range from 350 nm to 1000 nm, with a spectral resolution of 2 nm. In contrast, the human eye has a sensitivity range from approximately 400 nm (violet) to 700 nm (red), with a spectral resolution ranging from 1 nm (in the green to yellow range) to 10 nm (in the violet and red ranges). You may have been exposed to spectroscopy data through your previous chemistry and biology courses. To thoroughly understand data, one must know where it came from, its limitations, and its interpretations and potential meanings. With this lab we hope to deepen your comprehension of the function of spectrometers and thereby enrich your understanding of the data they produce. This will lay a firm foundation for your use of spectroscopy in your broader scientific career.

Matter has rich internal activity. Since matter is bound together in stable situations by forces, it has lots of natural ways to oscillate and resonate. The methyl groups on organic molecules can spin around. Similarly, long molecular chains can vibrate back-and-forth like a spring. Within each atom, electrons are constantly shifting towards and away from the nucleus. Each of these processes has a particular wavelength (color) of light associated with it: a specifically-sized photon energy packet is emitted or absorbed. Since light can only be absorbed or emitted in these packets, the way different colors of light interact with matter tells us about the energy spacing between the allowed excitation states of atoms and molecules. Doing a spectral analysis of light emitted or absorbed by something can give us a lot of information about it. Stokes (famous for his study of viscosity) was the first to show that hemoglobin was the molecule responsible for carrying oxygen in the blood—he did this using spectral analysis! On an entirely different physical scale, it’s spectral analysis that permits us to figure out the composition of stars.

Your lab will consist of three parts: I) exploring the quantized atom; II) exploring emission and absorption; and III) analyzing the emission spectrum of chlorophyll. The lab report you turn in at the end of this investigation should discuss answers to questions posed in the sections below as well as any insights you gain from your explorations and investigations, along with the data supporting those insights.

A Short Introduction to Light and Photons

The Bohr Model of the Atom

Perhaps the most famous model of the quantization is the Bohr model of the hydrogen (H) atom. In this model, the proton nucleus of the hydrogen atom is orbited by the single electron at fixed orbital radii, like a planet orbiting a star. Unlike a planet, however, the electron can have only certain discrete radii corresponding to certain discrete energies. The energy of the nth level is

where n is the integer that labels the state. The lowest-energy state (usually called the ground state) has n=1, corresponding to energy –E0; the next-lowest-energy state (usually called the first excited state) has n=2, corresponding to energy –E0/4; and so on until the highest energy state (n=∞) where E=0. Larger values of n correspond to the electron being farther and farther from the nucleus until it finally escapes altogether at n=∞ and the atom is ionized. 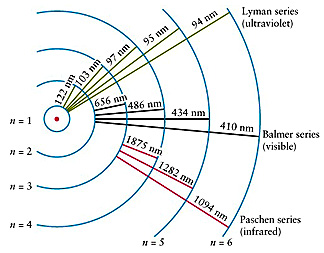 When a H atom transitions from a state ni to state nf its energy changes; in order to conserve energy it must either produce or consume a photon containing the energy difference between these two levels:

In summary, only certain discrete values of energy can be emitted (or absorbed) by the atom – in accordance with the formula for ΔE above. Each of these values of ΔE corresponds to a particular wavelength (and frequency), so an atom can only emit or absorb certain discrete wavelengths of light.

Use Lab 10 blank as a template for your lab writeup.

Questions to be answered